With Holden's surgeries behind us, we've finally been afforded a chance to just relax.There is no more worrying when the next operation will be. No more worrying about weekly appointments at the cardiologist. We no longer have to toss the kid on a scale every morning. No more intricate daily feeding logs. All behind us.

We took advantage of it. A few weeks ago, we packed up and headed to the east coast for five days of fun and sun in beautiful Cocoa Beach, Florida. It was our first vacation, a "family milestone" if you will. I quickly shot back to images of my own family vacations as kids. Complete chaos. We'd spend a week or so aimlessly driving around the Blue Ridge Mountains, stopping to eat at the Western Sizzlin and challenging fate on small mountain side dirt roads. They were so much fun.


We're not there yet. It's baby steps if you will, especially considering Holden is only 9 months old and doesn't know the actual difference between real life and vacation. Just handing him a newspaper to destroy is  a vacation for him. If only we were all that simplistic.

For one day my sisters, cousin, and a couple friends came out to join us for the day. I joked to them, "What is the best way to tan the baby? He needs a little color."

The sudden look of scorched earth appeared from brow to brow.

"Seriously, can we just rub some Mazzola Oil on him and leave him in the sun for a few minutes?"

(To note, I am a ginger. We burn rather quickly. My kid makes the kid in that movie Powder look like George Hamilton)

Of course I was kidding. They had probably figured that out before the words left my lips, but the mere idea that I would suggest such a hazardous and careless move left them wanting to make sure.

As we trekked down to the beach we passed through the smoldering coals known as the sand. My only choice was to dance my way down, with the baby in tow.

It was hot. Scary hot. Luckily for Holden we had baby play tent to keep the heat away. He loved it. We made sure to keep his exposure outside limited. Usually no more than an hour at a time, and that was stretching it.

A few days later, with temperatures cooling we brought Holden out placed up a tent and dropped him in the sand. He starting sifting through it like an old prospector. It wasn't long until the tiny granules made their way to his mouth. 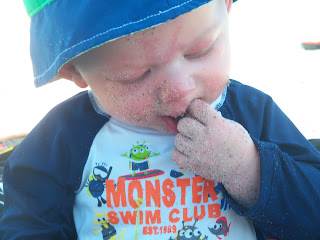 I know what several of you are thinking. Did they let the kid sit there and go at the sand like Winnie the Pooh would take out a jar of delicious "Hunny"? Of course not.

The week ended with a nice beachside dinner a local restaurant. It was the first time we had taken Holden to a "set down" joint.

Was an it "epic" vacation by any means? No! Of course not. It was the type of relaxation that mom and dad needed with their little guy. The last few months have been a stress bucket at times, but it has shaped us in so many ways.