Halloween, Thanksgiving and All Sorts of Other Shenanigans

We're sorry we haven't updated this lately. Holden has gone super mobile. The days of simply placing the kid in one spot with the direct knowledge that he'll remain in that one spot are long gone. When you're not chasing the kid these days, you're trying to out think his 14 month old mind..."where, pray tell, is this kid going next?"

It's an impossible science, so I've developed a diagram to describe the situation. 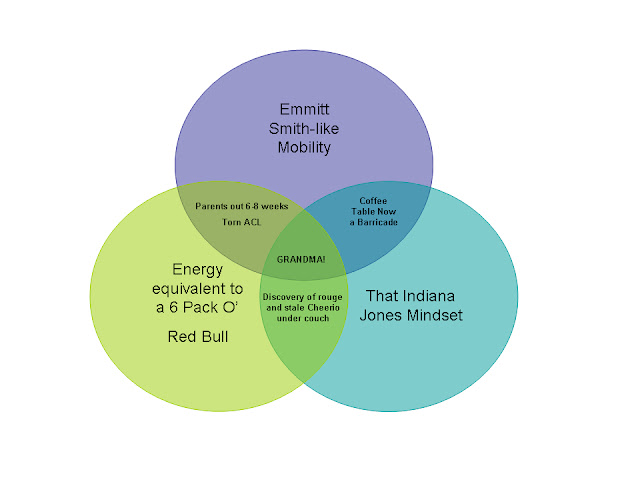 We've had a busy few months though! Where do I start? (I'll warn you, this is broken down all nerdy like)

On Halloween, Holden went trick or treating for the the first time, and while it was only a quiet stroll around the block, he managed to accumulate about 4700 extra calories for mom and dad. (Like we were going to save it until he was old enough to eat it).

We did let him touch the candy. Call it cruel, we just weren't willing to test the boundaries of a toddler hopped up on a box grape nerds. We like sleep. Sanity. Cease-fires. You name it. Peaceful = good.

We dressed him up like Stewie Griffin (Family Guy, if you're not familiar). Why Stew Griffin? Dad kinda' figured it would be the one time in his life that he could choose the costume. In a few years our vote will have very little pull, especially when you compare it to Spiderman, or whatever superhero is eating at our bank account at that time. 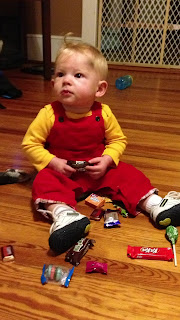 Thanksgiving was at Nicole's parents house. Holden dove into the turkey with the rest of us, he somehow even made it through dinner with no major issues, a Thankgiving 'mare-a-call. Of course the second dessert reared its face it was time to go. As you can tell by these few sentences it was very uneventful from a Holden aspect...not that Thanksgiving was uneventful, but it was for other reasons.

We learned our Santa lesson last year. If you'll recall we ended up at Bass Pro Shops huddling up next to a Santa whose fragrance was best described as a seaside blend of bourbon and Easy Cheese. Not that it was a massive failure or anything, he played the roll well. It was just not what you want in a Santa these days.

My advice? Go early. Very early. Like Veterans day early. Today, I see those brave parents' statuses littering Facebook. Two hours for Santa? Not for this clan.We walked right up, high fived Ol' Saint Nick, levied a lien on our house to pay for the photos, and got coffee. All in less than 15 minutes. 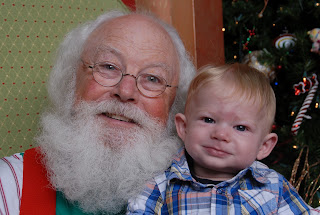