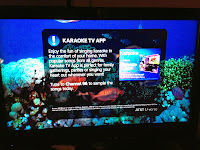 The insanity spread. For weeks afterwards, anytime one of us slightly grazed the remote, "Fish!" would eject from his mouth. It didn't matter where he was, or what activity he was involved in, he just knew what we were doing.

When it can time for his birthday, we knew we had to get him a fish. It was too obvious. So Nicole, Holden and I trekked down to the pet store and found the healthiest looking Betta Fish on the shelf. One that looked like he'd appreciate a the lifestyle provided by us Flynns. (It barely beats being the prize of some county fair's ping pong toss)

It was a match made in heaven. While the fish is still without a name, Holden is excited to talk about it. In fact, he'll tell you about it...(Yeah I broke all rules of smartphone video recording etiquette with the head to toe screen, but you have to act fast with these kids)