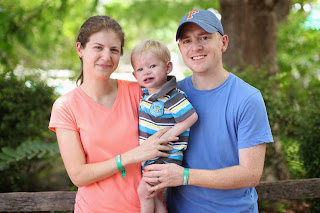 It was October 11th, early in the morning. We were scheduled for a big C at 7:30 AM (I say we, but it was really Nicole going under the knife). I roping my way through only a couple hours of sleep, all reduced by the anticipation of what was to come. After arriving at the hospital, we valeted, walked up to a tiny waiting area, and sat. I was maybe 5 minutes in before I announced that my intentions to go get some coffee to try and counter the fight that my weighted eyelids were putting up. Without much objection, I set off for the cafeteria and loaded up a 20 ouncer of Dunkin’s finest. As I rushed back up to the waiting room. Nicole was nowhere to be found.

“Mr. Flynn, your wife went back”

“Okay,” I said, as I made a furtive movement towards the double doors leading into who knows where.

The attendant stopped me. “Mr. Flynn, you can’t bring that coffee back there. The patients, they’re all NPO, they haven’t had anything to eat or drink in hours. We don’t allow food and drink in that area.”

I had to make a quick decision:
(1) Toss the coffee and go.
(2) Sit and finish my beverage while my wife began receiving numbing agents for the cutting.
(3) Chug.

I was tired and anxious. I needed the kick. Chugging the steaming, hot, 5 minute old beverage seemed like the most prudent option. As the 20 ounces of caffeinated glory scalded my throat I held in all possible whimpers. I couldn’t look like a softie in front of everyone. This was a big day for us, and no one wants to see a new dad cry for any reason other than the birth of his kid. As I hit ounce number fifteen I felt my eyes tearing up. It was so painful, but so worth it. I finished up, tossed the cup into the garbage, and waltzed back as if I’d just passed the first real test of fatherhood..PAIN.

We entered the operating room around 7:30, everything up to this point in the morning was all such a blur. I do remember doctors requested that I take a seat next to my wife, and in front of the blue screen set up to ward off the loss of consciousness or stomach fluids. As they started the cutting I jumped up.

Broken sentences came out of the ol’ flood gates. I was too excited. “My dad. Surgeon. I’ve seen worse. Blood. Guts. Nothing bothers me. Iron stomach.”

“Please sit. We’ll let you know when you can stand up.”

I sat again, but kept trying to subtly peak up. Not that it was easy, the top of the curtain was a little  less than eye level when I was standing.  Unlike myself, Nicole remained calm. It was kind of easy when you’re on light doses of sedatives and strapped to a table, but I still have to give her props for such a demeanor.

When they finally told me to stand, I peered over the curtain just in time to witness the doctor lift a naked and blue Holden.”  It was 7:46 on the clock and there was my son, after almost 9 months of waiting, I finally saw him. I was going to meet him. We are now best friends forever.

Not to go too deep, but there were a lot of unanswered questions to be had about how his little ticker would do out of the womb. The brief moment of celebration turned silent as nurses rushed to make sure he was okay to hang around for a few minutes before being taken up to the NICU. The room’s silence was drown out only the scream coming from Holden’s young lungs. While that scream echoed off the walls he was warding off nurses one by one by swinging all appendages in a fashion that has become quite common these days.

I responding with the only observations that I could get out my mouth, “I don’t know, but he’s putting up a good fight."

It was at that moment that a nurse announced, “He’s good.”

I finally received that invite over to take a look at Holden, get some foot prints on my smock, and high five the kid for the first time. They followed that up by bringing him over to Nicole and letting us sit there be new parents for a few minutes. It was erie. He literally went from swingy mcswinger to calm in a matter of seconds as he perched himself into his mother’s hands.

We were parents. Our son came out ready to fight. Two years later, that fight still amazes me every day. Holden Joseph Flynn, Happy Birthday, keep fighting the good fight. 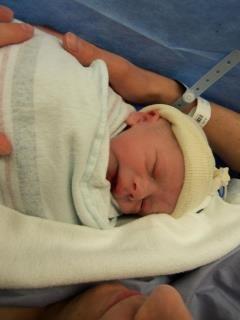