Sometimes (meaning regularly) the nurses have to change Holden's dressing around his PICC line (think, permanent sterile IV.) Because of the aggressive, territorial behaviors that Holden exhibits with such a change, they've had to give him a little something-something to keep him calm for the 10 minute procedure. The effects don't last long, but they'll throw him on the skids for a few minutes. 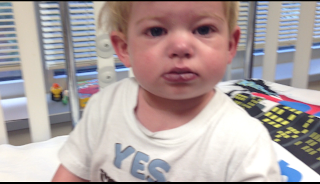