Holden likes cups. He will only drink from a cup. If it's not a cup, it's garbage. I guess we should be excited, it's a definite sign of maturity. The obvious line of thinking has to be, I want to be like my dad.

The problem is, he isn't a pro with a regular glass yet. In many cases he'll carefully raise the plastic chalice to his lips and allow the liquid to steadily flow into his mouth, no issues. In other, more extreme cases, he'll just go frat boy on the cup and soil everything in his immediate perimeter.

Recently, that problem has been fixed by some Genius cup that Nicole found at the store. It looks like a cup and drinks like a cup, but it comes with a lid that hides inside the rim. In healthy terms, it's a faux cup, designed solely to trick youngins' into believing they're in the big leagues now, kinda like training wheels on a bike or that pipe that comes with your bubble set.

Since acquiring said cup, Holden has rarely relinquished possession. It's like he's Uncle Si, from Duck Dynasty. And for those not familiar, Uncle Si always is carrying his green iced tea cup that his mom sent him when he was in Vietnam. I've put together a picture of the two to compare. 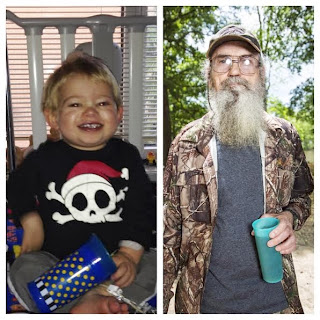 (We'll admit it, we're suckers for Duck Dynasty. Yes, we know the show can be repetitive at times. We know that a lot of it is staged. It's just funny, and in the end, is one of the few shows on television that presents a great family message.)