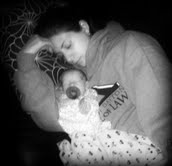 Most of use remember our month old birthday. The relentless gas. Sitting in your own filth. Hunger pains at all hours. The only thing you got going for you? It is one of the few times in life that you can actually boss your parents around. It's like...

But all that hype about a kid changing your life? Overrated. Lots of things have come about in my life that have required the following.

- 24 hour attention, devoiding one's self of any and all personal time
- The joyful handling of another's feces
- A combination of Earplugs, Tylenol 3, and an IV drip of crude grain alcohol to get through it

We wouldn't trade our first month with Holden for anything though. The highs have been great. He's somehow achieved head control during tummy time, the ability to Mutumbo smack the hell out of his orange dangling thing what hangs over his floor pad, and most of all the recognition of one's hands, a discovery that rivals fire, electricity, and Burrito Bros. Taco Company.

His Halloween was filled with sleep. He literally slept through the peak hours of Trick Or Treating. That was through a number of door knocks and screams, supplemented by the victorious bark of Maggie, who somehow found a 4 year old Spiderman to be the equivalent of Jack the Ripper. He still dressed for a part, twice.


﻿ ﻿
We had our first appointment with the cardiologist on Monday. While there were no answers about what is to come, we do know Holden has gained a pound since birth, and he's doing about as well as he can. You can't complain with that, now can you!