I want to start this off by thanking ALL of you for your support. The cards, the phone calls, the texts, and pictures of you in sporting your Team Tin Man shirts. Everything. It has  all been so amazing, and I can't wait for the day that Holden can come around and individually thank each and every one of you.

We got a big medical update this past Monday. Lets start by putting the good news out there. Holden's first operation was successful. He recovered very quickly, and is back to being everything he was before going under the knife. Giggling. Talking. Farting. Kicking the wind without a care. He's just really good at being a great all around kid. That being said, there are some issues. You see, it didn't completely address the problem at hand. Holden's lungs are still taking on more fluids than they should.

The first procedure placed a small band (think $1000 zip-cord) around the pulmonary artery by his heart. The artery controls the blood flow to the lungs, and the band by restricting that blood flow decreases the fluids to a level that you or I might have. As the doctors told us before surgery, it's an inexact science. The band was adjusted while Holden was sedated to the dickens, and your body tends to react differently when you're active, so it's a tough call. We were told that in about 20% of cases, they have to go back in to adjust the band.

It was apparent a few days after surgery that it wasn't working as well as the doctors wanted. The original belief was that he'd grow into his band, but that's not looking likely at this point. As his heart works hard to offset the excess fluid, he has plateaued, and his weight gain has struggled the last few days.

Unfortunately, we're in that 20%. There is only one option from here. Go back in and readjust the band. Yes, that means he's going to need the first operation again, it is necessary to get it right so can move on to the next stage of getting his ticker fixed.

We're scheduled for Monday. Holden was admitted to the hospital yesterday to monitor his feedings, and to make sure he doesn't lose any more of those precious ounces before the operation. Fear not, he's under the care of some of the world's best doctors, nurses, and support staff. He's currently housed in a corner suite with the attention of a small army of nurses. This isn't what anyone wanted, but it is what is needed to fix the Tin Man, and that is what matters.

Holden is a warrior. We witnessed a few weeks ago as he recovered from his last operation so quickly that he was out of the hospital two days earlier than expected. 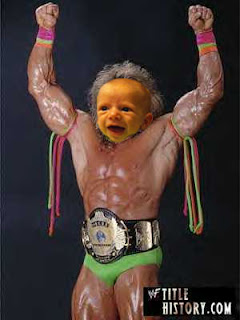 Okay, maybe not THAT type of warrior, us Flynns tend to run a little bit smaller. How about this? 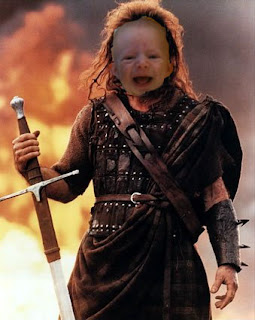 We'll provide updates on the little man throughout the weekend, and all next week.

Thank you all again.