Holden Is Home: How Did I Explain Everything?

As many of you know Holden came home on Wednesday, bringing with him a few scrapes and bruises that easily could tell his story without words. He’s endeared, conquered, and moved on to the next phase of this process.

The kid is a champ, needing only a few microliters of Tylenol (WHAT THE HECK IS A LITER!?! I need it all in archaic medieval terms please! THAT’s WHAT WE LEARNED IN SCHOOL) to combat the pain, he loves being home. (And at least for mom and dad, away from the hospital) Truth be told, the kid doesn’t remember what happened. It has nothing to do with the fact that he’s 3 months old.  You see, the doctors gave him a mysterious amnesia drug.
Amnesia drug you say? Yeah, it’s a drug that not only knocks you out, but helps you forget everything that happened. It’s not quite as cool as the pen light Will Smith and Tommy Lee Jones toted around in Men in Black, but close.
To Holden, his timeline looks like this.
Awake --------------------(48 hours)-------------------à Ow! What the heck happened?
That means I get to fill in those 48 hours any way I want. You ask, how does one explain the cuts on his chest? Easily. What follows is my account of the 48 hours he was knocked out. He bought every minute, promise. 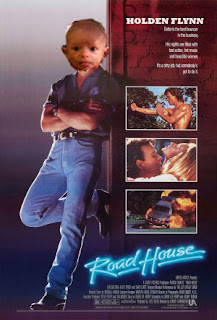 Wanting a new life, one with a little less action, a little less stress, Holden moved to a small town in Missouri. It was one of those places where a stranger just doesn’t fit in right away, but far from the busy life that he had been wrapped up in for weeks. It was going to be easier on him, or so it seemed that way. In a town of a couple hundred people it’s hard to cause trouble, unless trouble comes looking for you. He was confident that it wouldn’t.
Holden took up shop as a bouncer at a seedy bar on the outskirts of town. It wasn’t a friendly neighborhood bar and grill as often pimped out in the Applebees commercials. There were no riblets. No under 500 calorie meals. No 2 for $20. No, this joint was visited by some of the roughest characters known to man. It was out of control. It was the type place that was perfect for him.
He knew a thing or two about bouncing. Most of his experience came as the doorman for a popular club in New York City. A trained fighter, Holden was once considered one of the best bouncers in the business. That didn’t matter in his new life. People didn’t know who he was, and he didn’t want to know who they were. At least that’s what he told himself. The owners only saw him as a hired gun anyway.
He befriended the only other guy who saw things his way, a man who looked an awful lot like Sam Elliot. You know the actor?! Anyways, this guy gave Holden the low down. He didn’t want to see this mysterious city boy get into more trouble than he could handle. He knew Holden wasn't used to this type of life.
It became apparent rather quickly that the area’s richest being, Brad Wesley, had a stranglehold on the day to day life of the town. By means of his massive wealth (estimated in the teens per year), he had the distinct ability to manipulate the residents via his extraordinary amount of henchmen, who followed his every step. For whatever reason they all felt threatened by Holden’s presence. He was a wild card. Someone they couldn’t control.  Things turned ugly fast, and while bouncing on evening Holden was forced to run out a couple of Wesley’s boys after they turned violent. Drunk and disorderly, they didn’t take too kind to his advice to leave and ended up in an old timey bar brawl. Able to hold his own, the men were ran off, but Holden was cut in the battle royal.
He looked defeated, this was unlike anything he knew in his previous life. Although he was one to usually avoid doctors and the sort, Holden needed medical attention. While awaiting in the small concrete room at the hospital, a stunning blond female walked in. It was the doctor. She was gorgeous. It’s tough being the town’s only doctor, especially when you once left it to pursue your medical degree. She knew of the outside world, but for whatever reason she couldn’t bring herself to return.
They hit it off, and while she was concerned for his well being in the light of the recent events with Wesley, he assured her everything would be okay. It couldn't have been further from the truth. Holden was invited to join Wesley’s gang to help further their exploits this small town. Wesley knew Holden would be just the type guy to help him achieve his ultimate goal. (To this day the goal can only be described as wanting the bar, which he could have easily purchased and avoided thousands of dollars in insurance claims and injuries, but why take the easy way out of this.)
Holden rejected these offers. You see underneath this rough and tough bar bouncer there was a heart of gold. That heart told him he couldn’t allow Wesley to exploit the people of the town he had resided in for a matter of hours. He knew he had to put an end to this abuse. Fighting back, Holden raided Wesley’s heavily guarded estate. Using nothing but his bare knuckles and his pacifier he found his way through it.
It seemed impossible, the numbers were out of control. But impossible was the way he liked it. Impossible was what led him to this town. The simple bouncer trained in martial arts overcame all odds and toppled the powerful villain.  He was bruised and beaten, but he was the hero. He won.
(The End)
His mom and dad by his bed, and a handful of pains littering his body, the couldn’t remember anything. His parents could though, and while it was some of the hardest days of our lives we had a supporting cast that was just unreal. Thank you to everyone for the thoughts, prayers, support, and even food you offered. It really means a lot to Nicole and I, and I’m sure Holden too.
We’ve got a long road ahead of us, but we’re ready. 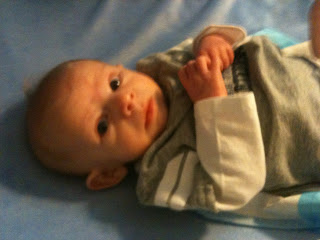