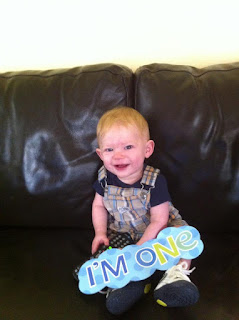 Exactly one year ago, at 7:46 in the morning Nicole and I were blessed with the greatest thing that has ever happened to us. Born at what we’ve described several times as the “Flynn-friendly” size of 4 lbs 13 oz, Holden Joseph Flynn came packaged with a lot of unanswered questions, and a lot of promise.
Read more »
Posted by JF at 10:30 AM 2 comments:

On Saturday September 22nd we had 117 runners, walkers, and crawlers invade Downtown Orlando. 5k, 15k, Kids run, it didn't matter, we were so abundant that race officials told me they always saw a member of Team Tin Man on their radar.

From what I was told by a couple friends, there were no zombies behind them to cause the crowd of people in front of them to run so fast. But everyone gave it a go and as a result, some of you were sore, beaten, battered on Sunday. That's what 5 or 15 Canadian miles will do to our bodies. In the end, everyone can agree, it was all worth it.

On top of all of our race participants, we had an unbelievable amount of donors. In all, 45 friends and family members from around the country donated to the the team. The outpouring was un-freaking-real. Our grand total was $16,229. Best by almost $13,000. The overall total raised for the NICU was $54,848.