﻿﻿﻿
As with anything the statistical breakdown tells the story.
Name: Holden Joseph Flynn
Nickname: The Tin-Man
Birth Date: 10/11/11
Time: 7:46AM
Length (at birth): 18 inches
Weight (at birth): 4 lbs 13 oz
Hair: Strawberry blond (Has more than his dad)
﻿﻿Eyes: Blue/green
Average feeding: 2oz delivered from Le Boob de Nicole
Diaper size: Newborn. (we ran out of Premmies)
Average dooks per day: 4.2
Average weight per dook: N/A (mom wouldn't allow me to do it)
Split second uncovered wang during diaper change firehose pees per day: 1.3
Head control: Swivelly
Hands: Edward Sissorhands-ish
Foot control: Kicky
Sleep: Holden's sleeping pattern can best be described as deep. He probably wouldn't notice an A-Bomb if it detonated 3 inches from his ear. He generally sleeps anywhere from 2-4 hours at a time. If he wakes up it is usually because he's hungry or he has farted loud enough to shake himself awake.
General likes/dislikes: Holden likes to feel confined. I'm guessing elevators shouldn't be an issue in the future. He also likes attacking his own face, and if swaddled will find a way to get his hands free to continue his own special grooming. His only real dislike is in the form of socks despite the fact that his feet are ice cold without them. It helps that he has such long and narrow feet, likely inherited from his mom, because the majority of dad's family has every wide, somewhat hobbitish feet.
Overall Roundup: This kid is a stud, like his father.
﻿﻿
﻿﻿

So Paige came up with the idea to have a "diaper party". She told Trey no its great all you do is have your guy frineds over and tell them to bring diapers. Trey poo-pooed the idea, then it dawned on him how many diapers we could get. So he made some BBQ, dropped a keg and put on football...1583. That's right we got 1583 diapers and close to 4000 wipes. Thank you! Yah we kind of feel bad, all these clueless guys thought they were getting a steal of a deal, just bring diapers and get free beer and food? HA! Sticker shock I'm sure. AND all the diapers we got were for babies-boy babies, not pull ups, and NOT adult diapers. Very classy gentlemen- again Thank you! 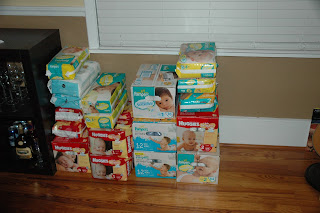 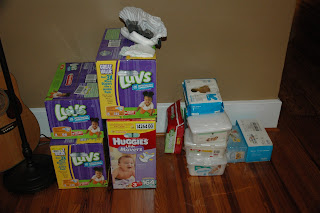 PS- This is only part of the supply! Couldn't fit them all in one picture!
Posted by nicole & trey at 7:01 AM No comments: