-So my hand, it fits into my mouth!
Holden has discovered that he has hands and fingers, and that they fit quite nicely into his mouth and eyes. He's very good at faking us out...nope not tired just trying to move my eye over to make room for my hand! He will spit or pull his pacifier/soother/binky or whatever you call it, out to immediately shove his thumb and a few fingers in.
-Shots! Shots! Sh Sh Shots! (now has a completely new meaning around here)
Being 2 months old means shots time!! Holden had his buffet of vaccines and took them like a champ. Which for a 7 lbs, chicken leg baby is awesome.


-Animal Planet
Lately the animals on his play mat have become enemy #1. Lay him under that orange monkey or blue elephant and it's on! Those animals never stood a chance, getting smacked and batted around by an infant learning to gain hand eye coordination. On a side note whenever Holden is playing on his jungle mat, Maggie will bring one of her toys over to Holden. Sometimes its to share other times it just to chew next to him. 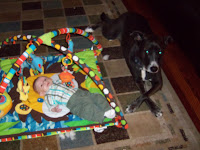 Happy Holidays!!
He might have only been a very mature 10 weeks old, but the Holidays were quite the hustle and bustle in the Flynn household. Being a religion mutt, Holden gets to celebrate all holidays.

It all started when he helped Nicole light the Hanukkah Candles. Very uncooperative. We tried to explain how awesome and cute it would be if he held on of the candles out as if he was lighting the Menorah. No go, so this forced shot was all we could come up with. 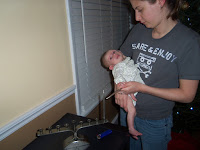 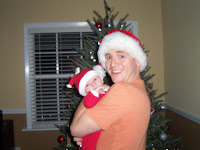 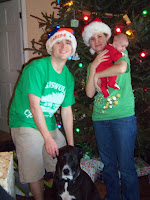 An attempted visit to Santa at the Millennia Mall left Mom and Dad finding alternative avenues to sneak a pic with Ol' Saint Nick as the end of the line was clearly marked with a 120 minute wait. Dad's yule flask wasn't full enough to put up with screaming, bored children for two hours. We caught word of Santa making a quick pitstop at the Bass Pro Shops. Ten minutes in line, a photo with Santa was taken, and despite the stench of cheap bourbon and vomit baby's first Santa photo was a success.

For some reason we wrapped his gifts. Why waste the paper? Do we hate Earth that much? Who knows, but the kid probably would have been content with a tree side chair as it glistened with all sorts of bright colors. That thing is like crack for him, but he imbibed in the unwrapping festivities, or was forced to do so at least.

What about the Christmas feast? Sensory overload. He lasted about 5 minutes, and subsequently voiced his displeasure. My family spoke all night about he looks a lot like my grandfather...he always hated crows himself.